If you follow the sun, you’ll find that, as fall edges into winter, it slips further and further south. The angle of the sun’s rays gets shallower, and the days become shorter with the sun in southern skies. But every year, it turns back and begins its northward course right around the time of the winter holidays: a new light is reborn, and we can start fresh in a new year. The Winter Solstice.

That said, many traditional cultures used the moon as an easier form of time-tracking. Her course, when accounting for the earth’s orbit around the sun, runs about 29-30 days from full moon to full moon. The moon cycle also divides neatly into four segments of about 7-8 days each, making it a useful way to mark the more practical weekly calendar. The moon traces more intimate rhythms, while the sun holds the broad, seasonal cycles.

But the lunar and solar calendars are offset: while there are about twelve full moons in a year, that’s not quite enough to account for all the days between one winter solstice and the next. In fact, there are about 11-12 extra days after twelve lunar cycles before the sun synchronizes with the calendar again. So, in order to keep the daily household rhythm and the seasonal agricultural rhythm aligned, our ancestors simply inserted twelve extra days at the beginning of the year, right after the Winter Solstice. These days existed outside of the normal lunar calendar, and after they were over, the weekly reckoning could recommence and be in line with the solar cycle again. This, of course, is the origin of the “twelve days of Christmas”.

There are numerous myths and legends associated with these twelve days. Because they were “outside” of the lunar calendar, many felt that they were also “outside” of daily life: a time of revelry, meditation, and communion with the spirits of forest and field, ancestors and guides. Nowhere is this more clearly articulated than in the myth of the Wild Hunt, which comes to us from the European tradition and most notably from the Alps, Germany, and Scandinavia (though different variants exist all the way into England and Ireland, too)? During the Wild Hunt, which took place most often during the days following the Winter Solstice, a riotous parade of spirits raced through the countryside, sometimes visiting the homes of humans, other times riding through hidden forest hollows. At the head of this wild procession was a powerful personification of the wilderness itself: depending on the myth, this was either the Green Man of the forest (often in England and Ireland), Odin the all-seeing (in Norse mythology), or, as is the case in the legends of the Alps, Frau Holle, the Elder mother.

As is often the case with ancient myths, the flavor changed over the years. Under the influence of more recent religions (which tend to think of forest spirits as less than trustworthy), the Wild Hunt became a perilous, seductive, destructive thing: woe to those who encountered in on winter nights, as they would be lost, possessed, or devoured by a bloodthirsty horde of demons. In these recountings, wildness was something to be feared, characterized by a loss of control and a destruction of the most civilized patterns that held society together during the regular months of the year. Perhaps it was also a way to ensure that more ancient, nature-centered festivals were shunned in favor of the more organized religious practices that were overtaking human society.

But anyone who knows the stories of the Elder mother would find it hard to think of the Wild Hunt as anything but a joyous, celebratory event. Frau Holle does not wantonly destroy, nor does she seek to purposefully harm humans. While she has no patience for the lazy or cruel, she rewards those who have worked hard during the year and celebrates the returning light with them during the twelve days that follow the Winter Solstice. In Trentino, northern Italy, the Elder mother (who is much respected) is said to lead the Wild Hunt by traveling in a spiral of swirling snow, still crowned with the white flowers of her Summer blooms, and followed by flax-fairies, rose-maidens, and all the spirits of the wild places: mountain gnomes, nymphs of the springs, and dryads of ancient trees. Together with her retinue, she hunts for deer and visits farmers’ homes. She tends to their spinning and weaving needs, perhaps to help ensure they will have warm clothes for the winter months ahead. This is the original flavor of the Wild Hunt: a chase, yes, but also an opportunity for the wild to come into our homes and renew the vibrancy of otherwise domesticated places. It is interesting to note that what was once desirable – an annual return to wildness – later became dangerous and scary. It may indeed be so: wildness isn’t always gentle and safe. But to our ancient ancestors, there was an expressed acknowledgment that, in spite of this, wildness was a necessity.

Many rituals surround this time, and some are specifically related to the Elder mother and her annual visits. An old story tells of a farmer and his wife, who had always grown beautiful flax and spun it into the strong thread for weaving. That year, however, their crop had failed and they had nothing to show Frau Holle when she visited during the solstice days. Not to worry: because of their hard work, and long-term respect for flax and elder, they were left with a ball of flax thread as a yuletide gift. When they woke to find it the next morning, the farmer’s wife immediately began to unwind the ball around her warping mill in preparation for a long-belated weaving session. To her surprise, no matter how much she unwound, the ball never got any smaller. She had been given a never-ending supply. 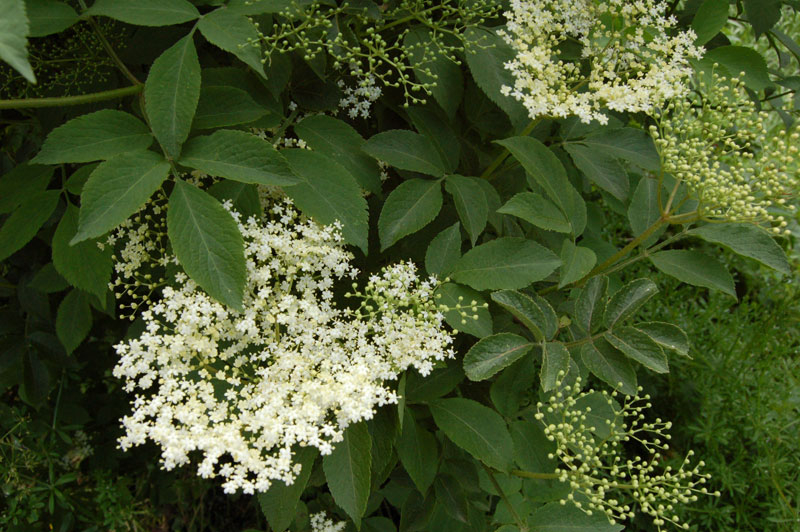 These days, those who know still leave elder flowers and flax seeds, or bundles of dried flax flowers tied with a flax thread, over their doors during the twelve days after the solstice in honor of the elder mother. Many, perhaps unaware of Frau Holle, drink elderflower tisane or take spoonfuls of elderberry syrup (or wine) during this time as well. A tea made from about a tablespoon of flowers, mixed perhaps with a teaspoon of rose petals, makes a reliable winter season tonic that herbalists would say helps “push out” negative influences and diseases, promote good circulation, and strengthen the heart and spirit. Nowadays, we can mix elderflowers, rich in golden pollen, with honey, elderberry pulp, and ground flax seeds to make a tasty electuary that can be blended into oatmeal, smoothies, or taken “as-is” to build vitality and resilience. Take about 2 TBS each of flowers, crushed berries, and ground seeds and place them in an 8-ounce mason jar. Cover with honey and mix well, allowing the blend to sit in a sunny window for a week or two (or twelve days). Take a teaspoon of the mixture once or twice a day during the next few months, until February days begin to lengthen.

It is often told that, trailing behind the Elder mother on the Wild Hunt, are two companions locked in a perennial struggle: the oak and the holly, lords of the growing and fading light, engage in another battle during this time of year. It is now that the oak defeats the holly, and opens the door to longer days (oak’s ancient name, dur, from which druid is derived, literally means “door”). The holly’s berries appear, a red reminder of the blood shed by the defeated tree, in the same way as the oak’s blood is shed and appears in the blossoms of St. Johns Wort during the midsummer festival. But if you have access to some holly wood, legend says that burning it in your fireplace during the twelve days calls the Wild Hunt to you, and also can give visions and revelations of what’s to come as winter moves into spring. Many myths circle around the yule log and what types of wood are burned during these days that are set aside from the regular monthly calendar. All of them serve to honor this “time apart”, and it may be a wise idea to keep a fire burning if you can, even if it’s just a candle flame that passes from once candle to the next, undying, on your family’s hearth.

If the moonlight is right, I enjoy wandering outside over snowy trails, late at night, during this time of year. Take walks with those you love, and try to find places that are a bit removed from the day-to-day. A warm mug of elderflower tea in hand, you may find yourself overtaken by the Wild Hunt – if you’re lucky. Regardless, know that the wild ones are watching over us still, undaunted by our fear and unconcerned that some call them “demons”. In the days of the oak’s return, may you find some wild time to bring back to the domestic corners of your life.

3 thoughts on “Elder Mother, The Wild Hunt, And The Winter Solstice”