Spicy, lemony shrub with its rich history needs a reintroduction into the kitchens and medicine cabinets of North America.

It can be found from Maine to Florida, as far west as Kansas, and in parts of Texas. It is happiest just inside the edge of the forest but can successfully be grown out in the open with strong attention to its watering. The bush has a long American history that is enjoying a bit of a renaissance.

When European settlers first arrived in the Americas, they would have had to struggle with many elements of homesickness — particularly the loss of familiarity with the plants around them. Seeds were surely transported, and some even thrived in the New World, but many of the plants that colonists depended on for food, medicine, dye, and textiles had to be left behind. This meant that settlers needed to quickly understand which plants could serve as substitutes for lost staples.

If you’re in a strange place and need to know the landscape, the logical thing to do is to ask the natives. One of the important plants the Cherokee people taught early settlers about was spicebush. Spices have moved humans from place to place, started civilizations, and founded empires. Here on the temperate shores of the U.S., the bright spices cinnamon and ginger don’t grow, but we’ve always had milder and cooler substitutes. Spicebush berries can be used as a replacement for allspice, and the powdered bark makes a serviceable cinnamon.

Spicebush is known as fever bush, Benjamin bush, snap-wood, wild allspice, Appalachian spice, spicewood, and “forsythia of the forest” to name a few. Beyond its culinary use, Native Americans taught the settlers about the ways they used spicebush as a medicine. This native population used the leaves, bark, berries, and sap in various ways. Internally, they prized the plant for its diaphoretic properties, or its ability to induce sweating. Native people used spicebush to ease colds, cough, fever, and measles. Externally, they used oil from the pressed berries to ease the pain of arthritis. They used all parts of the plant interchangeably as compresses (external applications of cloth soaked in tea) for rashes, itching, or bruises, and they also used it to remove internal parasites.

Soon, the colonies began to expand, and many itching to explore the West. As they walked, they deepened their relationship with spicebush. Paul Strauss, in his book The Big Herbs, tells us that chewing on the twigs will quench thirst and moisten the mouth. In this way, spicebush walked with the settlers, many of whom were traveling with their families as they moved toward a farm they’d bought, sight unseen. Spicebush was associated with rich soil and easy access to the water table. If the surveyor said that the shrub was on the land in question, it was a safe bet for a successful farm.

Over time, the Americas’ access to the hot and intense spices of the East became easier. Medical advancements yielded awareness of plants with healing properties, and then modern drugs left the need for many plants behind. Spicebush was left alone in the woods to quietly feed the insects and animals that depend on it for survival. Only now are we coming back to an awareness of its presence?

Spicebush is now a featured member of Slow Food USA’s Ark of Taste. Many are stepping back into the dappled shade of the forest’s edge to become reacquainted with this shrub. Spicebush is fond of moist soils along streams or in rich woods. It grows between 6 and 12 feet high. At its base, one often finds some of the most endangered of our medicinal plants, such as black cohosh, ginseng, false unicorn, goldenseal, and wild yam. In March and April, just before the leaves emerge, it sports pale yellow blooms that are a great early source of nectar for bees. The male and female blooms arise on separate shrubs. When the leaves appear, they are opposite, simple, smooth, and oval to oblong with a spicy, aromatic smell when crushed. In fall, the leaves turn a beautiful yellow that contrasts sharply with the red spicebush fruit. This fruit is an oval-shaped drupe containing one large seed. It’s bright, glossy red, and spicy when ripe in August through September.

In winter, after all the fruit has been eaten, you can identify the spicebush based on the gray to an olive-green color of the stems, which have a spicy smell when broken. The leaf scars are crescent-shaped, and both young stems and old bark are dotted with pale lenticels (raised pores where oxygen and carbon dioxide are exchanged). Spicebush spreads as a colony, by its roots. If you have a friend with an expanding group of spicebush, late fall is a great time to dig up some of the colony and move it to your house.

Growing spicebush is relatively easy, provided you have a good spot. Plants can be grown in full sun if you water them often and provide a rich soil with plenty of leaf compost. After they get established, they require little in the way of pruning or animal-proofing (deer don’t like them). You can just sit and enjoy the constant visual interest and all the other wildlife your spicebush will attract. The real problem will be deciding exactly which recipe you’d like to use with the leaves, twigs, and fruit your shrub will provide.

As a supplement, almost all parts of spicebush can be used in food and medicinal preparations. Spicebush bark’s antifungal capacities were demonstrated in a 2008 study that showed its activities against both Candida albicans and the fungus that causes athlete’s foot. To use the bark in this way, either make a tincture or simmer (decoct) the root in water for 15 to 20 minutes.

The entire shrub is high in volatile oils, making all parts of the plant likely effective at settling the stomach when made into a tea. The leaves are especially good as a tea and should be picked while glossy and green. The twigs can be picked to add to a tasty medicinal brew at any time of the year. If you’re hoping to have a cleansing sweat or break a fever, brew your tea for 30 minutes (4 ounces twigs to 1-quart water) and serve hot.

If you wish to use the berries, the possibilities for food as medicine are endless. Berries are ripe around the same time as apples, so think of the potential combinations! Dry berries in a dehydrator, and store them on a shelf or immediately freeze them. Some people cut the seed out of the middle before freezing, but I think that’s unnecessary and potentially removes some of the flavors. You’ll need to run unblanched, frozen berries through the food processor before adding them to a dish. Dried spicebush berries can be ground with a spice-dedicated coffee grinder. Try adding the resulting powder or pulp to coffee, cookies, chai tea, cobblers, curries, and more.

Spicebush is a strong part of our country’s past — but why keep it there? With so much to offer our landscape and even more to bring to our pantry and apothecary shelves, it deserves another look by all who enjoy a little history in the garden. 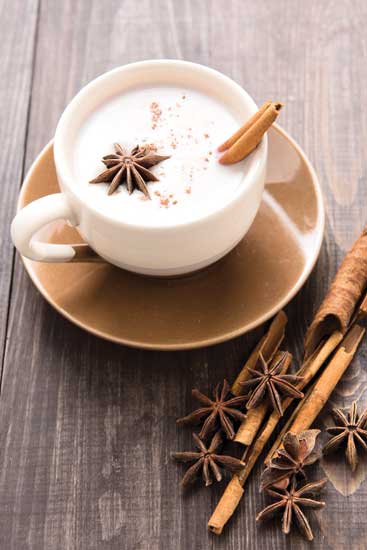 Fever Chai can bring some relief to fever symptoms, but you may make it without the milk for someone who’s experiencing a fever related to a respiratory illness, as milk can exacerbate symptoms of congestion.

1. Crush all the spices lightly with a mortar and pestle and place them into a saucepan.

2. Cover the spices with water and bring to a boil.

3. Reduce heat and simmer for 30 minutes or until the water has reduced by half.

4. Add the milk to the saucepan and bring back almost to a boil.

5. Remove from heat. Add the black tea, cover, and steep for 5 minutes before straining.

6. While still warm, add sugar or honey to taste, and then use a milk frother to whip your chai. 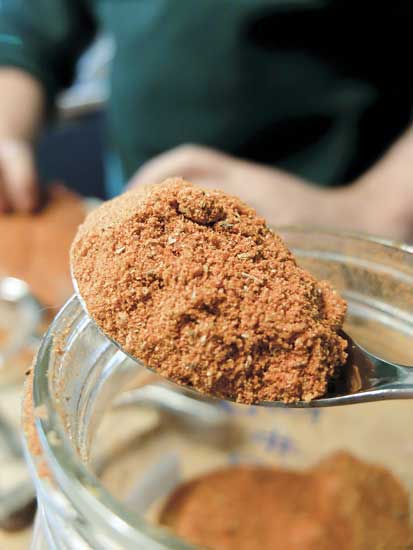 This sweet and spicy rub is the perfect addition to steak, brisket, or pork.

This rub is best on a grilled steak or brisket but also works well with pork.

1. Combine all ingredients and place in an airtight container.

2. This mix is shelf-stable but should be used within 6 months.