“Super seven” stone, also referred to as “Sacred seven” or “Melody stone”, is a quartz stone that contains seven materials; goethite, cacoxenite, rutile, lepidocrocite, amethyst, clear quartz and smoky quartz. Super seven stone is not much to look at; in fact, it looks like a dirty quartz gem with some purple amethyst zoning. However, those who believe in the power of crystal healing claim that the combination of the seven materials is extremely beneficial. Let’s learn a little more about the parts that make up this special stone.

Goethite is a brown-black or yellow-brown mineral that occurs mainly as fibrous crystals. It is made up of oxyhydroxide iron. Though it can be made into gemstones, it is rarely seen. Goethite is said by crystal healers to be a stone of communication, both physical and spiritual. Cacoxenite is a yellow, orange, green or brownish hydrous iron phosphate mineral that grows in fibrous bundles. Therefore, it is not suitable as a gemstone material in itself but is usually seen as an inclusion within clear quartz. Cacoxenite is thought to raise spiritual awareness and a sense of divine purpose.

Rutile is a mineral made up of mainly titanium dioxide. It is another material that is mainly seen as inclusions within quartz and also topaz. Additionally, rutile gives some sapphires and rubies the “silk” that is highly regarded by gemologists, and causes some gems to have asterism (the star effect) or chatoyancy (the cat’s eye effect). Rutile appears as golden, reddish, black or other colored inclusions in rutile quartz. Rutile inclusions within gemstones are often seen. Rutile is said to be an energizer and harmonizer. It is also considered to be helpful in easing negative energy such as worry and anxiety. Additionally, some say that rutile amplifies both the powers of other quartz crystals and the thoughts of the wearer.

Lepidocrocite is also known as esmeraldite or hydrohematite. It is a deep red or red-brown mineral which has the same chemical formula as goethite, but a different crystal structure. Often, reddish quartz inclusions that are assumed to be lepidocrocite are actually hematite. Lepidocrocite is believed to aid communication and understanding, especially between lovers. Additionally, it is thought to calm hyperactivity and block negative energy.

Amethyst is a beautiful gemstone and one of the most prized members of the quartz family. The purple color of amethyst comes from traces of iron and aluminium. Amethyst can be pale or deep purple and may be translucent to transparent, and also occurs as geodes. Geodes are crystal structures inside rock cavities. Amethyst geodes are sometimes extremely large, but small sections are sold as gemstones. For those born in the month of February or under the sign of Pisces, amethyst is their birthstone. Amethyst gems have been worn for many years in the belief that they provide protection from intoxication and the name “amethyst” comes from a Greek word in connection with this. With regard to crystal healing, amethyst is thought to enhance cognitive ability and is recommended for creativity and focus.

Clear quartz, also known as “white quartz” or “rock crystal” is the purest form of quartz, which is made up of silicon dioxide. Clear quartz can contain inclusions of goethite, rutile or other materials. Quartz with rutile inclusions is traded as “rutile quartz”. The rutile appears as needle-like inclusions that are usually golden, reddish or black. Clear quartz is believed to amplify existing energy and open the mind and heart of the wearer. Smoky quartz is brown to black or smoky gray quartz. It can be translucent or transparent. The color comes from natural radiation that occurs over time within the earth. The chocolate color of smoky quartz makes it a popular jewelry gemstone. Smoky quartz is associated with magic since it is thought to ground its wearer, protect against negative energy and assist healing. 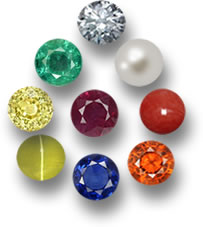 The Nine Sacred Gems Believed to Have Beneficial Properties

Super seven stone appears to contain an amazing combination of crystal healing properties. Another type of jewelry known as navaratna or “nine gems” jewelry is also believed to pack a mighty punch when it comes to metaphysical properties. However, where super seven stone is not always the prettiest jewel in the box, navaratna jewelry, containing nine sacred Jyotish beneficial gems is extremely pleasing to the eye. This is because the nine gems are diamond, pearl, red coral, orange hessonite garnet, blue sapphire, chrysoberyl cat’s eye, yellow sapphire, emerald and ruby. With navaratna gems, the wearer not only has nine beneficial gemstones but also a stunning piece of jewelry.

Super Seven also is known as “Melody’s Stone” or “Sacred Seven” is a rare crystal found in only one place in the world, the Espiritu Santo region of Brazil, just north of Rio De Janeiro. Ranging in color from deep Purple, to smokey, almost black, to crystal clear with amazing inclusions of gold and pink, Super Seven is comprised of seven very powerful minerals. Super Seven contains elements of Amethyst, Cacoxenite, Goethite, Crystal Quartz, Lepidocrocite, Rutile and Smokey Quartz. Considered by crystal healers and metaphysical collectors to be a very special, powerful stone, Super Seven is one of the rare crystals that never needs cleansing, re-charging or energizing. Even the smallest piece of this wonderful crystal retains the full power of each of its seven mineral varieties. The list of metaphysical and healing uses of this stone is extensive and continues to evolve as enthusiasts unlock its secrets. Super Seven is known to enhance the power of psychic abilities such as clairvoyance, telepathy, telekinesis, channeling, and coming in contact with your spirit guide.

Super Seven has the remarkable trait of combining and intensifying the healing properties of each of its seven minerals!