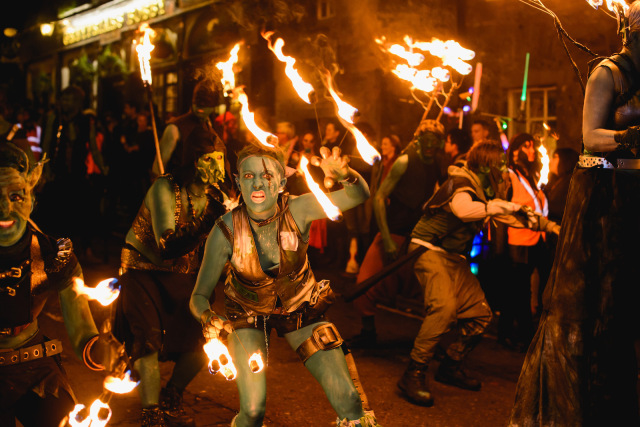 The membership of the Society has often celebrated the other quarter-day festivals. After the success of Beltane, Samhuinn was our next public event, first taking place in 1995. Our Samhuinn celebr…

Forget Halloween. Edinburgh’s annual Samhuinn Fire Festival is a league of its own. Brought to you by the Beltane Fire Society, this unique and atmospheric event celebrates the Celtic new year, the end of summer and the beginning of winter. With amazingly detailed costumes, mythical creatures, fire, lots of drums, naked skin and enthusiasm the Samhuinn Fire Festival brings the epic Celtic tale of the Summer and Winter Kings to life, illuminating Edinburgh’s Old Town. That’s the Edinburgh way to wish summer farewell. Winter surely is coming!

This 31 October, Edinburgh’s cobbled Royal Mile will once again host the country’s most spectacular Hallowe’en night event. The Samhuinn Fire Festival celebrates the Celtic New Year, marking the end of summer and welcoming the onset of winter. The event, starting at 9pm, takes the form of a stunning torchlit performance along the Royal Mile to West Parliament Square, with wild drumming, acrobatics, fire-dancing and intricate costumes as dozens of volunteers act out battles between the forces of summer and winter.