Day of the Dead: Ritual and Ceremony

Little is firmly known about the particulars of today’s holiday since the limited sources available are either folkloric literature like the Celtic sagas or Roman authors who would have likely “trashed” the traditions of a culture with which they were often in conflict.

Although, you can kind of imagine what really went on back then. Different cultures around the world gathered in a ceremony to honor their ancestors on and around November 1st. This sacred day was often known as a cosmic aperture, where the veils get thin, and the souls from “the other side” can contact us with more ease. There’s plenty of written experiences where people have encounters with spirits or ancestral anecdotes from all over the world regarding the ceremonial processing of these mystical energies. Samhain, for example, is very well known as its a three day ancient Celtic pagan festival, that was known for sacrifice, prayer and celebration to honor the departed, and their ancestral bloodlines, through devotional acts, often considered sacrifices to assist the dead to enter heaven.

Dia de Los Muertos, Day of the Dead, is another popular example that is often confused as the Mexican version of Halloween, yet it certainly is not. Day of the Dead originated several thousand years ago with the Aztec, Toltec, and other Nahua people. For these pre-Hispanic cultures, death was a natural phase in life’s long continuum. The dead were still members of the community, kept alive in memory and spirit—and during Día de los Muertos, they temporarily returned to Earth to rejoice with their loved ones on this plane.

The centerpiece of the celebration is the altar, the ofrenda.
Ofrenda, means sacred offering, is what you place on your altar as an offering to your loved ones that passed, and to your ancestry. The altars of Dia de Los Muertos can be some of the most inspiring and colorful scenes you can imagine. And, these aren’t altars for worshipping; they’re actually meant to welcome spirits back to the realm of the living. As such, they’re loaded with offerings—water to quench the thirst after the long journey, food, family photos, and a candle for each dead relative. If one of the spirits is a child, for example, you might find small toys on the altar. Marigolds and oftentimes Calendula, are the main flowers used to decorate the altar. Scattered from altar to gravesite, marigold petals embody Solar energy, the light, guiding wandering souls back to their place of rest (Heaven). The smoke from the copal incense, a resin from the sacred incense tree family Burseraceae, acts as a transmitter of prayers and purifies the aura and area around the altar. The name copal was probably derived from the Nahuatl copalli, meaning “resin.” 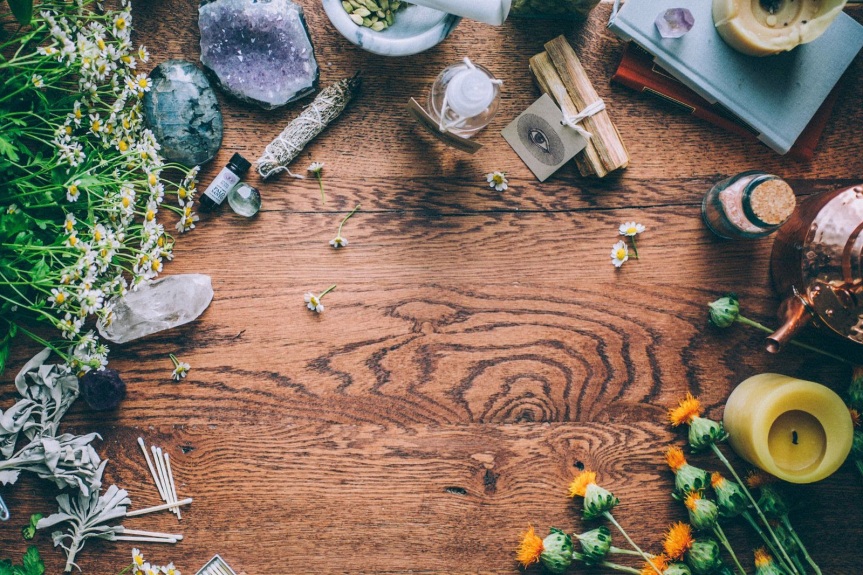 RUE
a favorite amongst Central and South American witches, it often used to purge, deeply cleanse the space and banishes bad energy. A fresh sprig of Rue is often placed in a cup of water, and according to how it behaves within a few days, it’s supposed to signal how the quality of your energy and your home’s energy is doing.

ROSEMARY
is a beloved around the world, used in Central and South America as an herb that provides protection and clarity. Oftentimes used by mediums to make it easier to actually see the departed.

MUGWORT
used like Rue, its an herb to cleanse, yet invoke higher energies.  Much like White Sage, it does the final cleansing, as it brings in the light after space has been purged (for example, oftentimes Rue and Palo Santo are used first, and then bringing in the light with Mugwort and Sage.)
MARIGOLD
symbolic for its Solar energy, used as a symbol for bringing in the light, and the qualities of heaven.

PALO SANTO
used to cleanse and uplift. Palo Santo has been known to act as a mirror, helping souls face themselves and find their way out into where they belong.

COPAL
like palo santo used as a spatial purifier, as well as a purifier to the subtle bodies and aura.

DRAGONS BLOOD (Sangre de Drago)
known to be the blood of a mythical, flying creature that, according to many stories, performs wonders and heals even the sorest of wounds. It’s often used in rituals where one has lost a partner, wife/husband, or a child.

Interestingly enough,
the Burseraceae family, the family that Frankincense, Myrrh, Palo Santo and Copal trees belong to,  produce powerful antioxidant-rich oils that are now being studied for their anti-cancerous, and anti-tumoral properties. So, seems like these “bad vibe” banishers aren’t just metaphorical helpers!

EGGS
Used an energetic seal, oftentimes employed directly to sew up holes in the subtle energy fields and aura.

BLUE LOTUS or WATER LILLY
used by the Egyptians and many indigenous people all over Asia when invoking the dead, and otherworldly. It acts as an antenna, or a transmitter, to receive higher wisdom, knowledge. Also used to be able to See and Hear the voices of the ancestors. In Central and South America, white and pink water lily’s that grow native to the jungle were used in the same way.

SALT
energetic cleanser prevents bad energy from entering the space. Often used in doorways, windows, or in a vessel. Many households keep it in a vessel in a corner, as the “wastebasket” of the space, so challenging energy can be disposed of easily.

PINEAPPLE
used as an ofrenda, food for the departed, in exchange for prosperity.

And there’s so much more!
These are just a few to start off with. Enjoy crafting your altar with your
loved ones during these sacred days.

4 thoughts on “BUILD YOUR OWN ALTAR Using These CEREMONIAL HERBS”