In recent years I’ve seen pansies being used more frequently in bouquets by designers who are either growing their own flowers or have access to a really high-end flower market. I have always loved these sweet, cheerful little flowers but never really considered them as a potential bouquet ingredient because of their small size.

Eager to figure out the secrets of growing them as a cut flower, I collected nearly 50 pansy and viola varieties that seemed most suited for production and grew them as part of a farm trial. Pansies have a more stocky growth habit and produce larger-faced flowers, while violas have a more airy and wild growth habit and much smaller flower heads. Both are pure magic!

The goal of this trial was to find both pansies and violas that had beautiful coloring with long enough stems for cutting and vigorous plant growth.

In addition to testing different varieties, we also tried out two growing methods to see which produced longer stems. Seeds were started in early February in 72-cell trays in our heated seedling greenhouse. Both pansies and violas are easy to start from seed and are great for beginning gardeners. 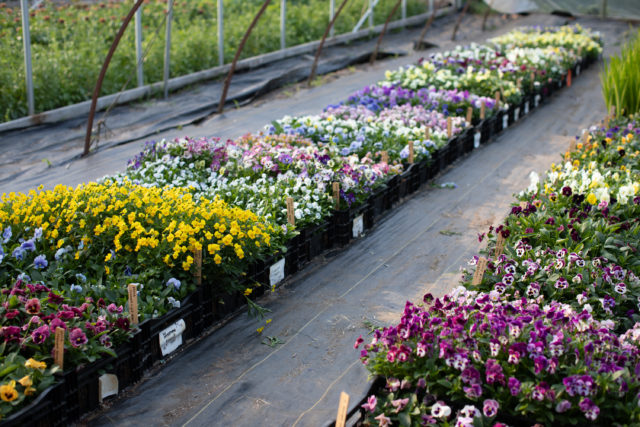 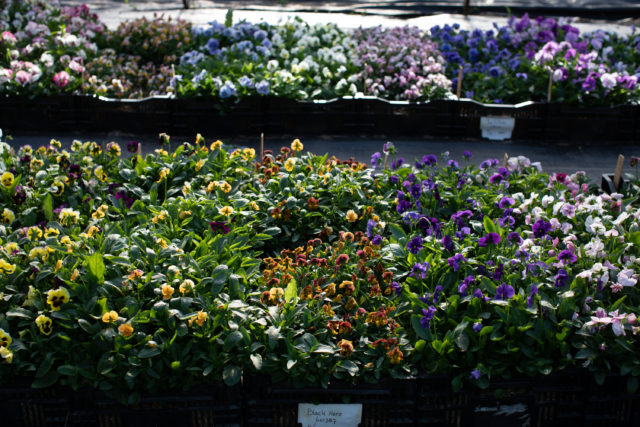 We planted the first batch of seedlings in mid-March in one of our unheated hoop houses. Because all of our growing beds were spoken for, we had to get creative and ended up planting the pansies and violas in bulb crates filled with potting soil instead of in the ground.

A bulb crate is a black plastic box with slits in the side that bulbs from the Netherlands are typically shipped in. They measure 15 inches (38 cm) wide and 24 inches (61 cm) long and about 8 to 12 inches (20 to 30.5 cm) deep. We planted 24 plants into each crate, with plants spaced 3 to 4 inches (7.6 to 10.2 cm) apart. The reason for the close plant spacing is that we had limited room and wanted to see if closer plant spacing would encourage the plants to grow more upright, resulting in longer stems.

The second method was planting the seedlings into landscape fabric with 9-inch (23-cm) spacing out in our field, growing them as we grow all of our other cut flowers. Seedlings went into the field mid-April, right before our last frost.

Pansies and violas are cold-tolerant and can handle cooler weather, and I actually think we could have planted them a month sooner than we did, around the same time as the ones in the hoop house.

Both growing methods worked well, and both plantings produced long enough stems for cutting. The field plants produced bushier growth and flowered a little later, probably because they went into the ground later, even though they were started from seed at the same time.

The plants grown under cover were much taller, and I think the closer spacing and protection from wind allowed them to produce more delicate trailing stems than their counterparts grown in the field. We find the same is true for almost any cut flower that’s grown undercover. Stems are typically 30 to 50 percent longer because the plants aren’t bracing themselves against wind and poor weather, and can stretch more easily toward the light.

Learn more about Floret’s search for pansies and violas that have beautiful coloring with long enough stems for cutting and vigorous plant growth.